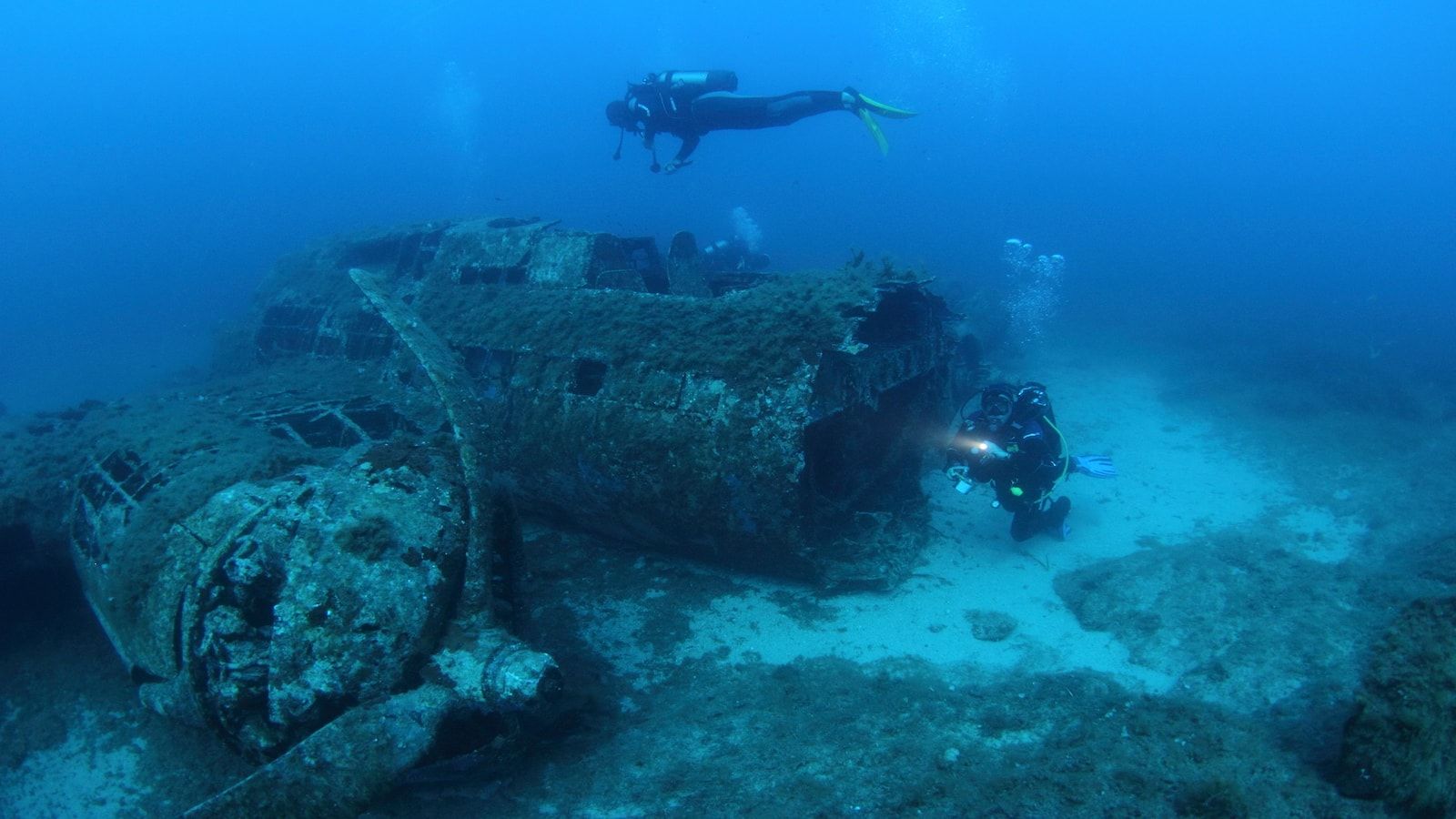 The Mediterranean’s most interesting wreck dives

We uncover our very favourite wrecks in the Mediterranean, from World War II bomber planes to purposefully scuttled tug boats.
A yacht charter in the Mediterranean is the ideal choice for a diving trip with a yacht providing the perfect luxury base for a varied diving itinerary.

KT12 armed German cargo ship, Orosei, Sardinia
This German cargo ship was making its maiden voyage on 10 June, 1943 when it was hit by a torpedo deployed by an Allied submarine. The torpedo tore through the bow, which broke off and sank immediately while the rest of the ship burned for 41 minutes before sinking. Full of trucks and fuel, the ship was on its way to support the German war effort in North Africa, leaving a wreck that is truly frozen in time – truck chassis strew the sandy floor, the engines are visible, you can even see the galley and a large oven. The most rewarding part of the dive is no doubt the 75mm main gun which sits atop the wreck.

Blenheim Bomber, WWII plane wreck, Delimara, Malta
Sitting between 39 and 42 meters depth, and 1 kilometer off Delimara Point, this WWII plane has intact wings and engines that are lined with sea life – sponges, crabs, lobster and tube worms have settled in along with moray eels, groupers and the odd sea turtle. The Allied plane was on its way to a bombing raid when it was attacked by German enemy aircraft. With severe damage to the plane, the tower ordered the pilot and two crew to eject and let it crash into the sea so as not to severely damage the runway. The location is unknown to many divers, making it a very quiet dive spot.

Cirkewwa, Malta Wrecks
Tugboat Rozi MV - Built in Bristol in 1958, this tugboat was scuttled to create an artificial coral reef and dive site after she was retired. She’s fully intact, with the exception of engines and propellers which were removed before sinking. The wreck makes for a complex and engaging dive, with a variety of wildlife including enormous anemones, sea bream, damsel fish, moray eels, cardinal fish and rainbow wrasses.

P29 Patrol Boat - This 52m Kondor-class patrol ship had a long career – it was was built and used as a minesweeper for Eastern Germany, then became a patrol vessel for the German Federal Coast Guard and finally worked under the Armed Forces of Malta for over 12 years. She was scuttled in 2007 to a depth of 33 meters after contaminants and engines were removed. It’s an advanced dive, especially for those who swim through the boat – highlights include the machine gun, the radar tower and the bridge.

MS Zenobia, Larnaca, Cyprus
Built in Sweden in 1979, this ferry capsized in 1980 on its maiden voyage and sank 42 meters to the bottom of the sea outside of Larnaca port. Along with the ship went £200 million worth of cargo and vehicles, some of which can be seen during the dive. On the outside of the deck divers can find moray eels slinking around vehicles and propellers, while inside you can swim through the main lorry deck and for the even more advanced, the second lorry deck. Expect plenty of barracuda, jacks and grouper.

B17 Bomber, Calvi, Corsica
One thing to know about the B17 is that it was an enormous plane, with a 32m wingspan, 13 machine guns, four engines and the ability to fly 3,200km without stopping. This particular B17 was making its way to Verona, Italy to bomb a railway when a German squadron attacked, seriously damaging the plane. The pilot changed course for Calvi and was forced to make a sealanding. Divers will find the plane perfectly intact, the inside cabin, cockpit and instruments are all there, including the pilot seats. Keep your eye out for tuna, seahorses, stingrays, brain coral and even dolphins.

To find out more about chartering a yacht visit our charter guide or contact the office more convenient for you. IYC has offices in Fort Lauderdale, Nantucket, Monaco, Greece, Croatia, Barcelona, Montenegro, Scandinavia, Malta and Russia. To contact an IYC office click here.