Picturesque, serene and not too far from Athens, Kythnos has been a go-destination for Greeks for many years. The simple, unpretentious nature of the island has made it a relaxing vacation spot for those who wish to get away from the world. Kythnos is derived from the ancient Greek word ‘to hide’ and those who sail its waters and drop anchor in its many secret coves will understand why.

Authentic Greece awaits you on the shores of Kythnos. A destination in itself or a stop on a wider charter of the Cyclades, visitors will leave this island feeling refreshed and rejuvenated. 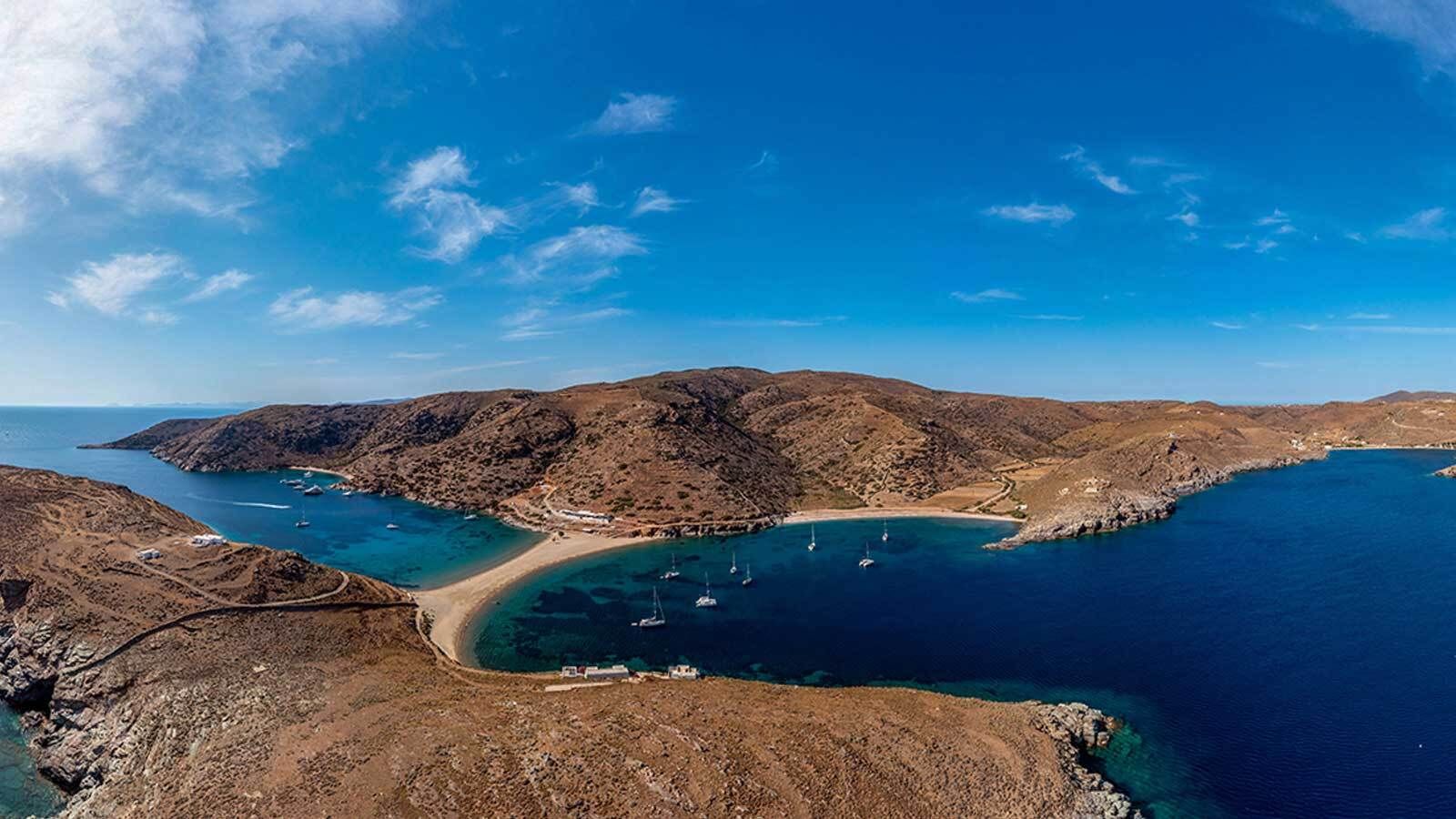 Kythnos has very pleasant weather throughout the year. The warmest months, May - September, are the most popular months to visit.

There are several beautiful cruising areas to explore around Kythnos. Lefkes Bay is a tranquil cove with a lovely beach surrounded by trees. A long sandbar separates the crystal blue waters of Kolona and Fikiada Bays and is a mesmerizing place to drop anchor and spend the day. Loutra Port is the most established harbor and port on the island and offers the best-protected anchorage on the island.

Loutra is an area on the northeast side of the island that is well-known for its thermal springs that have welcomed visitors since the early 19th century. Today, guests can enjoy the natural, water-based therapies in a contemporary spa. The natural springs are rich in salts, sulfur and iron, and offer a truly relaxing experience.

Best spots for wining and dining:

Da Massimo is a beautiful waterfront restaurant just moments from Martinakia Beach. A great option for lunch or dinner, there is a delicious selection of light bites to choose from, along with a comprehensive wine list. For authentic Greek cuisine in a casual atmosphere, try Byzantio near the port, while Ostria is a restaurant famed for its seafood – order the lobster spaghetti! For after dinner drinks, Panochori is a lovely spot for evening cocktails and The Kraken is a relaxed, buzzing bar for late-night revelers.

The cuisine of Kythnos varies slightly from other islands as its rich grazing fields are ideal for raising cows, sheep and goats. Visitors can expect many local dishes to include meat, often cooked with lemon or fresh tomatoes. However, its proximity to the sea does also ensure lots of fresh seafood – squid, mullet, anchovies and swordfish are very popular. Make sure to try some of the island's rich dairy products, including feta cheese and Kopanisti.

The beautiful whitewashed houses, rugged terrain and small towns of Kythnos are an idyllic picture of Greece. The small towns on the island are best explored by foot and have a slow, peaceful pace of life. There are several monasteries and ancient ruins that offer an insight into Kythnos’ past, including the Monastery of Panagia Kanala, the Monastery of Panagia of Nikous and the castle of Oria. The folklore museum on the island is also well worth a visit.

There are a huge variety of bays and beaches to visit on Kythnos. Kolona beach connects the main island to a beautiful islet of Agios Loukas and Episkopi beach is a well-protected sandy spot in a small cove. Gaidouri Mantra beach is very secluded and best reached by yacht or tender, so is a perfect option for a more tranquil day by the water.

Driopida is a traditional village on the island that will transport visitors back in time. The residents have fought to keep its authenticity and rejected any modern tourism developments, which means it has authentic Cycladic architecture and narrow, winding streets. Nearby, you will find the Cave of Katafiki – one of the largest of its kind in Greece. First discovered in the early 19th century, the cave has amazing rock formations and stalagmites.